You are here: Home / Korean Lessons / Similarities between Hindi and Korean languages

Do you know that Korean language has a lot of similarities with Hindi and other Indian languages?

Things like the word order in sentences, the concepts of post-positions or case markers and honorifics are very similar in Korean and Hindi.

And that makes learning Korean language through Hindi much more easier and efficient than learning it through English.

Let’s see what are the similarities between Hindi and Korean in detail:

Above are the reasons why I started a Korean lesson series on YouTube where I teach basic Korean through Hindi.

Some lessons on the channel are in English but in every lesson I continuously compare language elements with Hindi and Indian culture so that it is easier for learners to grasp.

If you are an absolute beginner learner or even if you some basics, I would suggest you to have a look at this Korean language lesson playlist on YouTube. 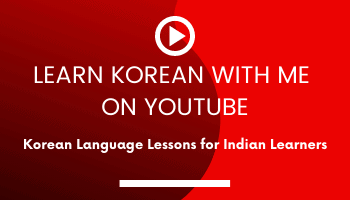